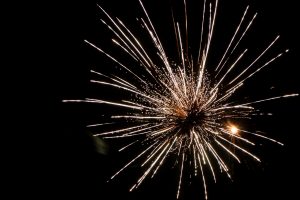 I’ve never actually done this before, but I wanted to try to take some photos of a fireworks display so I went to a Pembrokeshire Young Farmers event in a field adjacent to Llys y Frân reservoir on Tuesday night last week.

I took my little Canon M6 with its 18-55mm lens on. It was an organised display so I didn’t want to be lugging huge cameras and lenses around, and besides, there were hotdogs to eat as well. I did bring a tripod but didn’t use it, I was in a crowd of families and so I just held the camera against a wooden fence. 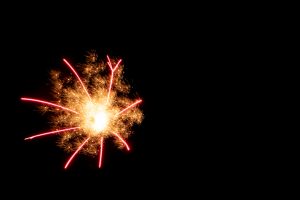 I set the Canon to manual mode so that I could control the settings to get the pictures I wanted. I’ll admit, there was a lot of trial and error … mainly down to getting the fireworks in focus.

I took over 120 pictures and I’m happy with a third of them. I’m reasonably satisfied with this percentage. 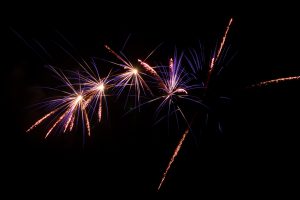 I wanted the night sky to be completely black so I set the ISO to 100, I kept it at this setting throughout the evening. The shutter speed was 1 second. I was worried that the fence wouldn’t give me a stable enough base but I needn’t have worried, the trails would have been quite wobbly if it wasn’t stable and, as it happens, they look quite even in the pictures that I took. 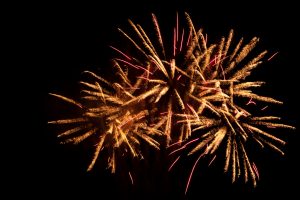 Timing was tricky, I had to anticipate when each firework was about to explode so that I could get the best shot. I have a lot of ‘night sky’ images where I hit the shutter either too early or too late! Another part of the learning curve was getting the explosion in focus. I could guess, roughly where they were going to ignite but I couldn’t leave it to autofocus, as it was just too dark. So I set the aperture to f/6.3  to give me a reasonable depth of field and my camera to manual focus and just hoped.

I’m quite happy with the results.

This entry was posted in Colour, Locations. Bookmark the permalink.