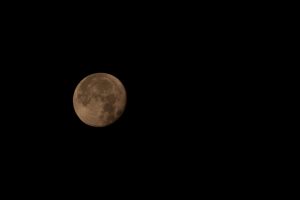 For some reason I woke early this morning and just could not get back to sleep, sometimes I just know when it isn’t worth trying. So I got up and made myself a cup of tea. While I was doing that I noticed the moon was just one day past full so I went into the other room to fetch my camera which, luckily, had a 150mm lens already attached.

I wasn’t wearing my glasses so I had to blearily estimate the settings to get a nice exposure. The image shown here was taken with a shutter speed of 1/400s at ISO 200 and an aperture of f/10. The settings are unusual for a dark morning but the moon was bright and I didn’t want to over-expose it. The side benefit is that the surrounding sky is underexposed and turns a lovely, inky black. 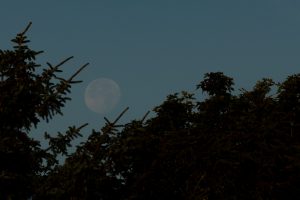 So I took my cup of tea upstairs and read for about an hour. I came back down for a second cup and saw the moon had sunk much lower in the sky. The early morning sun was up and the sky was bright. I didn’t want to lose the now much larger moon against the bright sky so I underexposed once again. This is 1/500s at f/10 and an ISO of 100. It sort of works. Maybe a multiple exposure image would have worked better.

Both images have been cropped in Lightroom to make the most of the moon in the picture.  I do have a longer lens, but 150mm is what was on the camera … and I was still only half awake.

I always like to take pictures of the moon, it’s such a familiar object in the sky and yet it has a romantic quality to it.

This entry was posted in Colour, Lenses. Bookmark the permalink.