I had a trip up to Mid Wales this weekend and I went to visit Devil’s Bridge just outside of Aberystwyth. I had just one lens with me, a Lensbaby 56mm Velvet, and no tripod. Devil’s Bridge is a series of three bridges built over a deep gorge with fast moving water running through it in a series of pools and waterfalls.

We’ve had a wet October and the force of the water running through the gorge was really quite impressive. I wanted to use a long shutter so that I could catch the fury of the river as it came over one of the outcrops. I got myself into position and placed my camera on a rock above the falls. Although it was secure I still kept hold of the strap in case the camera fell … I’d never get it back! 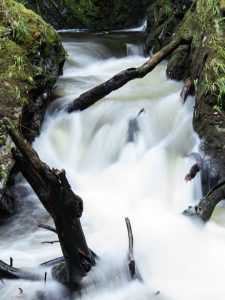 The shot shown here is with the manual focus Lensbaby at 1 second and an aperture of f/4 and ISO 100.

It was interesting to shoot the same image at 2 seconds and also at ¼ second. The longer shutter speed, in my opinion, lost a little too much detail in the churning water at the bottom of the picture. I like how you can still see some of the surface of the river at 1 second.

Of course, if I’d planned the shot I would have brought a tripod, an ND grad filter and probably used a different lens. But that’s what I had with me at the time, so that’s how the image has turned out.

This entry was posted in Colour, Lenses, Locations, Stills. Bookmark the permalink.