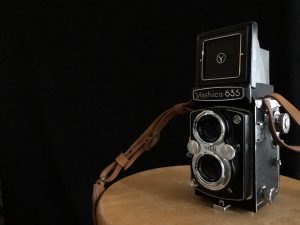 I mentioned in an earlier post that I’d bought myself a second-hand SLR 35mm film camera body that I could use with my current lenses. I had learned a lot through using this camera, it helped me to slow down and think about my shots. It also introduced me to the fun of developing film.

Well I was hunting around on eBay and I saw an auction for a Yashica 635 TLR camera. It looked so different to the sort of cameras that I normally use that I was more than intrigued. 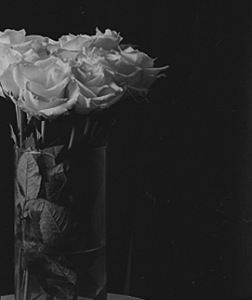 To cut a long story short, I eventually bought myself a second-hand Yashica 635. What I particularly like about this camera is the fact that it is able to accept both 35mm and 120mm film.

The deciding factor, however, was the fact that it can operate a flash. There is a hotshoe on the side … but it is just to hold the flash, the control is via a small PC connector on the front of the camera. This means that I could hook it up to my studio lights. The photo of the roses shown here was taken with a single elinchrom strobe to one side with a plain black backdrop: in just the same way as I’ve done many times before. I was delighted with the results. 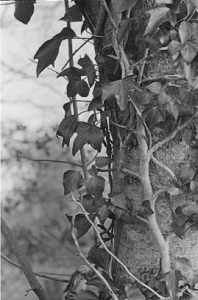 With the SLR film body I could click it into Aperture Priority and not worry too much about the exposure. The Yashica, on the other hand, is completely manual. Of course, with the image above, I could control the exposure with the flash but in all other situations I will need to use a lightmeter … or just guess!

Both of these photos were taken with 35mm film.

In use, the camera is completely different to my other equipment. TLR stands for Twin Lens Reflex, this refers to the two lens in front of the body. The top one is used as a viewfinder and the other one, an 80mm lens, exposes the film. So your view is slightly different to the final image.

Focusing is achieved by looking down onto the top of the body where you see an image on a ground-glass screen. The image is inverted horizontally so composing an image takes a bit of getting used to.

This is a machine that won’t replace my digital cameras but I’m sure that the discipline of using it will help my photography in the long run. And even if it doesn’t, it’s a lot of fun to use.

This entry was posted in Film, Lighting, Monochrome, Stills. Bookmark the permalink.