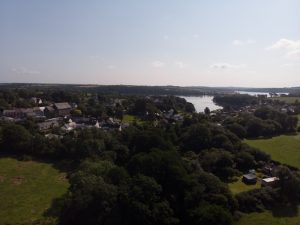 One of the requirements of my drone pilot’s licence is that I need to complete a certain number of flying hours each month. It’s work but, you know, it just has to be done. I’m NOT just playing with gadgets you understand.

I was flying my drone ( a DJI Mavic Air) from the garden this morning. The day was shaping up to be sunny and warm and the sun had only just fully risen.

The drone has a little camera on board over which you have full control. It has a fixed lens (24mm, f/2.8) but you can control how it takes the images.

The sun was low and bright, I could see the River Cleddau in the near distance but also make out the trees and houses that surround my home. To take an image that represented both of these things would be difficult, so I opted for an HDR (High Dynamic Range) picture. What the camera does in this case is to take a number of images at different exposures … one correctly exposed for the dark trees, another for the bright sky, and one in between. The image shown above is a composite of three photographs taken by the drone at different exposures. Apart from cropping and rotation no other image manipulation has been carried out. 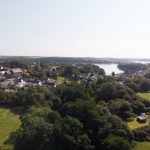 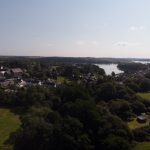 These are the three images taken by the drone: one is exposed for the darker areas (trees, etc); the next is exposed for the sky and the third is what the drone considers to be middle ground. I imported the individual photographs into Adobe Photoshop and merged them into a single image. It was the software that did all the hard work.

When making an HDR image it is important that all of the pictures match up with each other. With a handheld camera you might well need to use a tripod, but a drone has such good stability that I could use the pictures directly from the machine. With the DJI software it is possible to take an HDR image composed of 5 separate photographs, I didn’t choose that in this case but, as with anything in digital photography, the more information the better.

This entry was posted in Colour, Drone, Lenses. Bookmark the permalink.