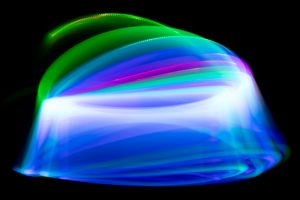 The Royal Photographic Society have continued to run their excellent courses even during the lockdown restrictions. But, of course, at the moment they are being held virtually. This is actually a benefit to me as I live well away from the usual course locations. The most recent course that I have attended is titled “Painting with Light”.

The course syllabus looks at different ways in which you can use photography to create an image in a controlled way using an artificial light source. We’ve all been given free rein to explore different aspects of light painting. I’ve been experimenting with pendulums … the image above is a simple pendulum with one light source while the one here is a compound pendulum with three light sources attached. 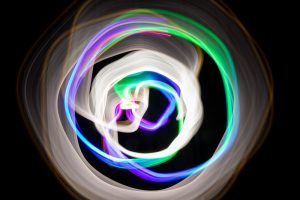 I like the abstract images that they produce, they remind me of those deep-sea creatures that you see on wildlife programs on television.

This image is a shot of the compound pendulum from below. You can see the complex paths taken by the three light sources as they move. 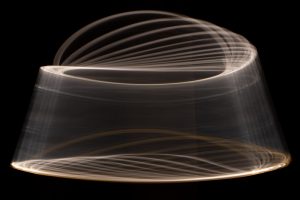 To take the picture I set my camera to manual focus, the shutter speed was 30 seconds and the aperture was f/22, with an ISO of 100. These settings meant that the background was black … all you can see is the light trail. The light source is a torch with an acrylic rod attached (think of a home made light sabre and you’re almost there) suspended from my ceiling by a piece of string. The compound pendulum is actually two coat hangers. One hanger holds a torch and a second hanger, the second hanger holds two more torches. All the hangers and torches can swing freely.

This entry was posted in Colour, Lighting, Stills. Bookmark the permalink.