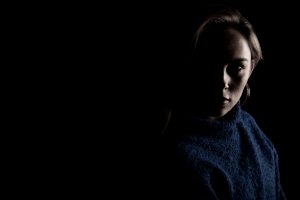 Just before Christmas I worked with a model, Keziah Watts, to practice some lighting setups. It’s a lot of fun to work with someone who is confidant in front of the camera and, in the end, I feel that the results are better than I could have made on my own … because there are at least two people working on the image. 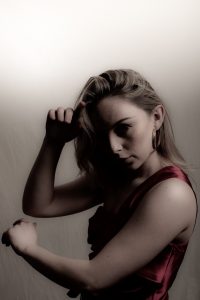 I do like melancholic images, so there were quite a lot of photographs taken with a black background and a single light throwing out a lot of shadows.

The one shown to the right was different though. I used an off-white, cotton sheet as the background and shone one flash head directly at it. The other flash head was placed to my right and slightly higher than the model.

I like how this setup creates strong shadows on the model but the background is still quite pale. There has been a little post-processing on this image. In Lightroom I desaturated the image a little and decreased the contrast in order to give the picture a softer feel. 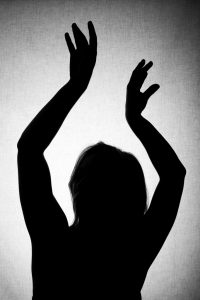 I feel that it’s important to show the model how the images are turning out as you take them so Keziah was able to change her pose to suit this style of photograph.

To be honest, I was a little disappointed with the light drop-off at the edges of the image. It looks almost like a vignette (which I’m really not keen on) but, after a little while I do actually prefer it. Especially as you can see the weave of the cotton cloth behind her. I’m going to experiment more with silhouettes.

The next two images are have quite similar poses, but I changed the lighting to control the mood.

This is a single flash head positioned a little behind the model and aiming at her head. The light shows her face in profile and really makes her hair stand out. I desaturated the image completely in Lightroom so that it became a monochrome photograph. I like the mood that it creates. 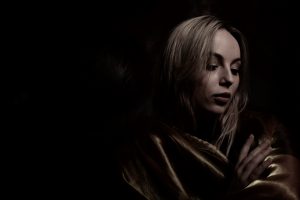 Keziah is looking to her left again in this image but I changed the lighting to a single flash unit quite high up and to the model’s right (my left). She had brought a long golden shawl with her and I wanted to use it in an image … but not in a flashy way.

I do like the deep shadows and soft reflections created in this image.