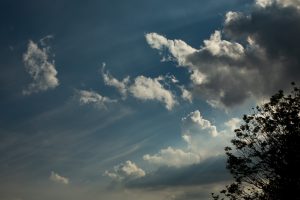 Here’s another thing that I find quite difficult to do effectively: make good, dramatic cloud photographs.

Yesterday the sky was changing quite rapidly so I used a circular polarising filter on my 50mm lens and took some photos of the backlit clouds. I reduced the exposure so that the whites weren’t blown out which made the sky a dark blue and the tree a silhouette. 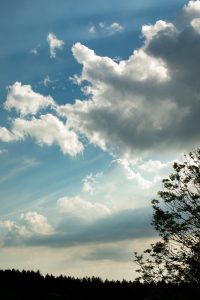 I think it’s important to have some sort of foreground feature because it’s difficult to get a sense of scale when taking a picture of just the sky. I find the same issue happens when taking pictures of the beach: what looks like a dramatic view can end up looking bland if you don’t have something to give it scale.

These photos were taken at about four in the afternoon and the sun was starting to drop towards the right-hand side of the images. The polarising filter really beefs up the contrast in the cloud (and darkens the blue sky) if you shoot roughly perpendicular to the direction of the sun. I quite like how the trees on the horizon lose their definition and become a lower frame to the image. 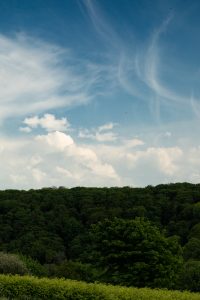 I did a little more post-processing in this picture. I used the gradient tool in Adobe Lightroom to increase the exposure in the bottom half of the picture. There’s also a little bit of dehaze going on just to lift the contrast in the leaves on the tree in the midground.

I think this image is the most bland of the three. I like the colours and I like the drama in the sky. But the lower third of the image loses too much definition. In hindsight I could have created an HDR image with multiple exposures (although the clouds were moving quite quickly); or I could have used an ND grad filter to underexpose the sky (but I don’t have one of these). It was an interesting topic though.

This entry was posted in Colour, Post Processing, Stills. Bookmark the permalink.