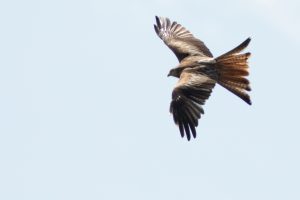 Well I hit eBay again last week and bought myself a second hand extender (also called a teleconverter). This is something that I can fit between the lens and the body of my camera to increase the overall magnification of the lens … but there is a cost … you get a more powerful lens, it’s true, but you lose some image quality and the handling is also affected. 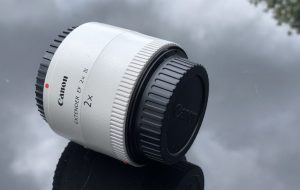 I wanted to take some pictures of birds but I didn’t want to pay a lot of money on a new lens to do so (well, I did but I told myself I couldn’t). There’s a red kite that patrols the area around where I’m staying during lockdown and I’ve wanted to take some photos of it. Just minutes after the extender arrived the kite started to soar around the garden so I thought I fire off a few shots. Of course, not all came out but I was quite pleased with the ones that were sharp, in focus and exposed reasonably well. 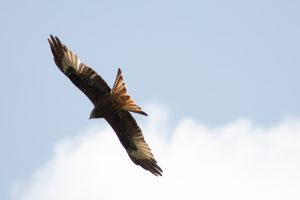 I had a 2x extender attached to my 300mm lens to take these pictures. This means that the lens combination was now 600mm. However the minimum aperture on the f/5.6 300mm lens was increased to f/8. I also had to increase the shutter speed to combat potential camera shake.  Which meant that the ISO had to be fairly high for such a sunny day (800 ISO).

For me, the extender has been the ideal route into wildlife photography. Sure, it wasn’t cheap … but much less than the thousands of pounds that I would pay for an equivalent 600mm lens. There is a trade off in image quality though and the restricted aperture choice means that it can only be used in bright conditions. But I’m looking forward to experimenting with this over the summer.

This entry was posted in Lenses, Stills. Bookmark the permalink.