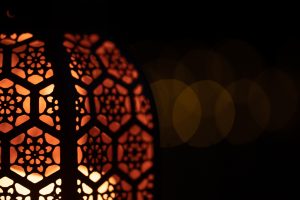 I’ve resolved to keep a camera with me as much as I can. So yesterday evening I took my camera with me as we sat outside watching the sun going down. It’s been a scorching hot week so we’ve been sitting outside every evening. We light a citronella candle to keep the annoying, biting bugs away and just talk about our day. While we did this I decided to put a long lens (150mm) on my camera and experiment. The image of the candle (with fairy lights in the background) was 1/25s at f/2.8 and ISO 1600. To be honest, I wasn’t using a tripod and that shutter speed is much too slow for that lens, but I think I got away with it. 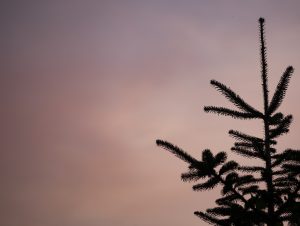 A little earlier in the evening I took some photos as silhouettes against the summer sky. The spell of hot weather was breaking and we were expecting a thunder storm, which never arrived, and the colours in the evening clouds were strange but subtle.

This image was taken using the same lens at 1/160s with an aperture of f/4 and ISO 400. I’m not 100% sure of this photo but the set up shows potential for further experimentation. 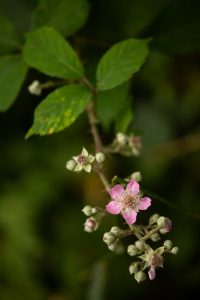 Then today, we went for a walk. We were exploring a secluded part of Pembrokeshire down near a slow moving stream. It has been a little bit cloudier today but still hot when the sun broke through. We found this shady spot with lots of wild plants and old trees.

This bramble flower took my eye. I still had the 150mm lens on my camera from last night. I set the aperture to f/2.8 to give it a shallow depth of field – I wanted the flower to be in focus and everything else to be context. I set the ISO to 200 and the shutter speed to 1/250s. It’s not the most exciting picture but I am pleased with it. It does convey the feeling that I had on that shady walk.

This entry was posted in Colour, Lenses, Locations, Stills. Bookmark the permalink.